Work as a Reward (What the Heck is a Tertiary Reinforcer, Anyway?)

We wrote earlier this week about why we train without compulsion, and at that time we hinted at a very powerful argument for sticking to reward-based training. Let’s delve into the topic a little more deeply now. 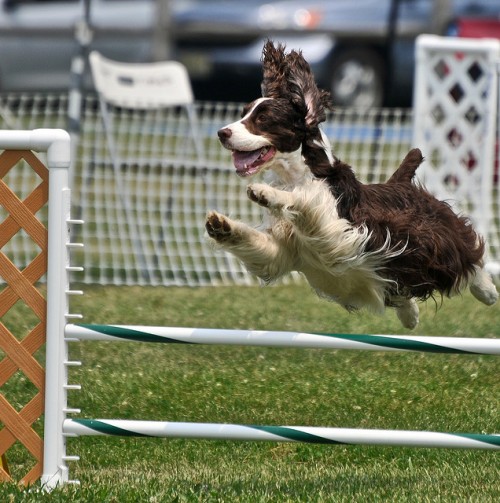 As we discussed before, dogs who are trained without the use of aversives learn to find joy in work. They feel a sense of excitement when they hear a cue for a known behavior. This feeling of joy is pleasant for both participants in the training process, but it’s so much more than just an enjoyable side effect of the training method.

The important thing to remember here is that the emotions you feel when you learn something new become associated with that behavior forever. This is why it’s so very important to present new skills to dogs (and people!) in a positive way. Which kindergarten teacher is more effective, the one who encourages exploration with toys, books, crafts, and songs, or the one who lectures to her students while they fidget in their desks?

Here’s where things start to become really cool for dog trainers: behaviors that have been trained using rewards such as play and food become so enjoyable for the dog to perform that they can become rewards in and of themselves. This is an advanced training concept that can be hard to wrap your mind around at first, but it’s mind-blowingly amazing to watch in action. Technically, a cue used in this way is known as a tertiary reinforcer.

One area that novice trainers often struggle with is how to wean their dogs off of reinforcement. This mindset of “getting rid of” the reinforcers misses the point. Smart trainers never have to wean their dogs off of reinforcement because the very act of performing behaviors becomes rewarding in and of itself. Your dog will find it rewarding to respond to you because it simply feels good to do so. This is how we can build complicated chains of behaviors.

Here’s how it works in action. Let’s say your dog knows and enjoys a list of behaviors that includes sit, down, bow, and high five, and is learning how to back up. Your training session may look like this:

How many rewards did your dog receive in the above sequence? If you’re new to training or using some level of compulsion to teach new behaviors, there are two secondary reinforcers (the tug toy and the click) and one primary reinforcer (the treat) in the above sequence. This means that your dog has to do quite a few behaviors in between rewards. The technical term for this is an intermittent schedule of reinforcement (your dog gets rewarded intermittently). Your reinforcement schedule looks like this (with the rewards highlighted):

However, if you’re a smart trainer who has trained your dog without compulsion, and he feels happy performing the behaviors he already knows, your reinforcement schedule looks much different. Now, your dog is on a nearly continuous schedule of reinforcement. Each behavior is rewarded by either a primary or secondary reinforcer or by the chance to perform another behavior. The chance to work has become a reward in and of itself. From the dog’s perspective, it looks like this (with the rewards highlighted):

The only behavior that’s not rewarded in this sequence is the sit in the middle, because your dog is still learning how to back up and so backing up is not yet well-known or -liked enough to function as a reward.

You can see how this could be powerful stuff. A dog who finds the opportunity to work with you rewarding in and of itself is a dog who will be more responsive and better able to carry out complex tasks (because each part of the task is rewarding). How cool is that?!

Of course, trainers who train without the use of compulsion or pressure still have their share of considerations. Next week, we’ll discuss some of the practical considerations of using tertiary reinforcers and discuss how to teach complex tasks that require multiple behaviors to be performed in a row.

In the meantime, please share your stories below. Which behaviors are your dog’s favorite to perform? Which behaviors does your dog not yet show joy in performing, and why do you think that is? We look forward to hearing from you!

9 responses to “Work as a Reward (What the Heck is a Tertiary Reinforcer, Anyway?)”