Last week we discussed how to create a dog who loves to work and how to make the act of working for you a reward in and of itself. This week, let’s talk about a potential dark side to secondary and tertiary reinforcers.

You see, the problem with your dog finding the cue to perform a behavior rewarding is that you may unintentially reward naughty behaviors. Since the cue itself functions as a reward, whatever your dog is doing when you give him the cue is being reinforced. 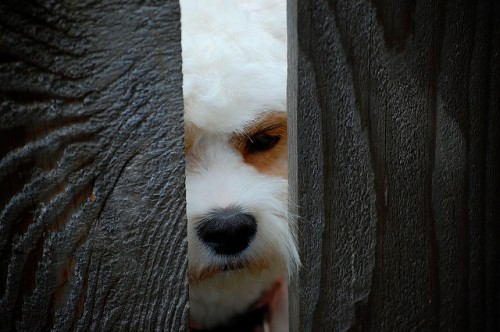 Let’s look at a real-life example to help shed some light on this problem.

Misty (name changed) was a gorgeous black Lab/Pit Bull cross whose owners called me in for a private consultation. They were worried that their generally sweet and friendly dog was becoming aggressive, because she charged the fence and barked when people or dogs walked past. Over the past three months, this behavior had been intensifying, and now she would charge the fence in a “fit of rage” for no observable reason at all.

Upon meeting Misty, I was pleasantly surprised by her gentle and affectionate nature. She was social and affiliative, with a tail wag that started at her shoulders and wiggled her entire body. When I stroked her she leaned into me and seemed to melt. She was incredibly well-trained, responding instantly and enthusiastically to cues. In fact, she seemed perfect, far from the unpredictable and aggressive dog her owners were describing.

We ruled out the most common causes of fence charging: territoriality, barrier frustration, overexcitement. Anyone could come into Misty’s yard without fearing anything worse than a bath from her enthusiastic tongue. She didn’t lunge at other fences, the windows in her home, or on leash. She was mostly calm in her yard, lying on the deck and sunbathing, and calmed down instantly when her fence charging was interrupted. In fact, she responded immediately to a quiet recall cue from her owners, no matter how amped up she seemed to be at the fence.

As Misty’s owners and I discussed the history of her odd behavior, a pattern began to emerge. Misty hadn’t started off with fence charging, but merely trotting to the fence and woofing. She oftentimes woofed conversationally once or twice when greeting new dog or human friends, and her owners were concerned that their neighbors would be unhappy with them if they permitted her to do this. Misty spent long periods of time outside sunbathing, but when she would woof her owners would call her to come in.

Misty loved coming when called, and always responded joyfully to their request. Over time, she learned that by barking at the fence, she could get her owners to play the recall game with her. During the past couple months, she had gleefully expanded on her woofing game, working up to more intense barking and running at the fence. While she had initially only woofed in response to people or other dogs outside of the fence, she soon figured out that woofing at any time, regardless of the presense of others, would get her owners to call her in.

Solving Misty’s fence rushing was simple, but required her owners to be very consistant. The first time Misty rushed the fence under the new rule structure was almost comical. She ran at the fence, barking loudly, and rushed back and forth, tail spinning like a helicopter blade and ears pricked up jauntily. Her owners watched quietly. When they didn’t call her, Misty ran halfway back to them, then ran back to the fence, barking the whole time. After three minutes of this, she stopped barking on her own and trotted quizzically back towards her people, sitting in front of them.

Because Misty’s barking and fence rushing was motivated by her owners’ attention, removing their attention for these behaviors and paying attention to her for calm and quiet behavior quickly eliminated her naughty habit. Misty’s owners taught her to lie down on the deck when people or other dogs walked past, and made sure that they only called her in when she was lying down, ignoring her fence barking. Because they had caught this behavior before it became a deeply engrained habit, and because Misty didn’t find it fun without her owners’ involvement, she quickly gave up on fence rushing altogether. If you walk past Misty’s yard while she’s outside these days, you’ll notice a slightly chunky Pit Bull mix with a helicopter tail racing towards her deck to slam down on her mat and watch you walk past.

Misty’s story is not uncommon. Dogs often learn to perform a chain of behaviors in order to earn a reward. If you’ve ever had a dog who jumps up on you before tucking into a sit, this is the principle driving your dog’s behavior. Your dog isn’t being willful or “dominant” when he puts his muddy paws on your dry-clean-only suit before planting his butt politely on the ground. Chances are, you’ve told him to sit while he was jumping up over and over, and he’s learned that he should perform a chain of behaviors to say hi: jump up first, then sit. By cueing him to sit when he jumped up, you effectively (if accidentally) rewarded his jumping.

Later this week we’ll talk about how to avoid this common training pitfall. In the meantime, feel free to share your own stories in the comments. Have you ever accidentally taught your dog to do something you didn’t want them to?

2 responses to “Accidentally Rewarding Naughtiness: the Reinforcement Value of Cues”