Beebe came to us, sight unseen, from a rescue group in Tennessee.  We were given inconsistent information regarding her history.  The one constant was that Beebe had been in several homes over her three years and that not everyone had treated her well.

Beebe had severe anxiety issues.  She bonded with me immediately, but she ruined countless pieces of my clothing by jumping on me and carrying on uncontrollably whenever I would come home.  Beebe was fearful of my husband and almost everyone else, especially males.  She barked and charged as if she was going to rip apart anyone who set foot in the yard or came to the door.  The Schwans man said he would no longer stop if Beebe was outside.  She also had a fear of brooms, fly swatters, stairs, and being put on a chain.  She licked her lips a lot and spent much of her time with pupils the size of saucers.  She was usually in hyperactive mode, especially in the evening when my husband and I just wanted to unwind.

Even though my husband and I had owned dogs most of our lives, we had never dealt with a rescue dog and we were at a loss with Beebe.  If we yelled at her or tried to discipline her for her behavior, she would cower and promptly pee on the floor. 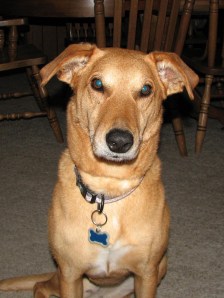 We thought time and love and a stable home would improve her behavior, but we made very little progress.  We tried melatonin, as someone suggested, but neither of us thought that was the answer.  And besides, it didn’t seem to make a difference.  After a year of constant struggle, we were at our wits’ end.  I couldn’t bear to let Beebe down by giving up on her, but we couldn’t take much more.

Then one of my rescue friends suggested that I contact Paws Abilities.  I was encouraged because I was told they had dealt with the problems that can be unique to rescue dogs.

I contacted Sara Reusche and she suggested that we set up a home assessment for Beebe.  I was very hopeful, but I was not prepared for how quickly Sara assessed Beebe and how effortlessly she got Beebe to respond in a positive way!  Armed with her bag of treats, Sara got Beebe’s attention and taught her a trick that remains her favorite to this day: “Touch!”

Beebe, my husband, and I learned so much in that hour.  We learned that Beebe needed to build confidence in order to allay her fears and anxiety.  In addition to general anxiety, she was suffering from fear aggression, submissive urination, separation anxiety, and just plain confusion.  She didn’t know who to trust or how to react anymore.

Sara taught us to look for signs of fear and anxiety: lip licking as a self-soothing behavior, pupil size, and body postures.  We learned to “read” Beebe, which opened up a whole new awareness for us.

We learned that disciplining her and yelling at her were the worst things we could do.  It reinforced her fear and anxiety and was very counterproductive.  Positive reinforcement, confidence-building skills (like tricks and puzzle toys), and withdrawing attention during unwanted behaviors were the keys to unlocking the beautiful and loving dog waiting within Beebe. 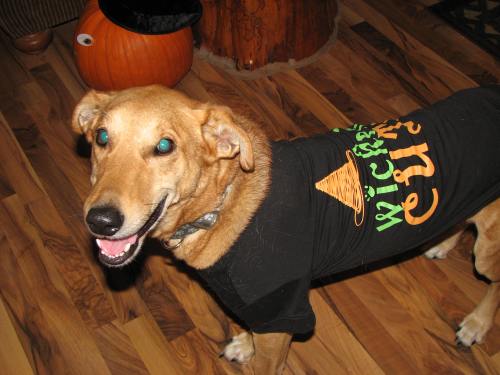 Beebe and I attended the Beginning Obedience Training Class to help her socialize with other dogs and people and to start building her confidence.  Not to brag, but Beebe was the star of the class!

Next we attended the Focus and Control Class so that Beebe could learn to calm herself in situations that would normally make her anxious.  She also learned to focus on me instead of becoming distracted.

Within months Beebe transformed from a fearful, hyperactive, reactive bundle of nerves into a confident companion.  Now she loves to go with us in the car and we trust her completely in social situations.  She gets along with other dogs and sees people as good beings who often carry treats!  (OK, I carry the treats and slip them one, but she doesn’t have to know that.)

Beebe was hit by a car in May and subsequently endured 3 surgeries and 2 months of rehabilitation.  During that time she regressed a little bit, but she never, ever became fearful of her veterinarian or his technicians.  As she rebounded from her injuries, she also regained her confidence and poise.  She is once again bounding up the hill with us twice a day, waiting politely to drink until the cats have had all the milk they want, and living her life as the best canine companion ever.

On August 29th, Beebe turned 6 years old. We look forward to many more years with her. Happy Birthday, Beebs!

– Sara Linker Nord, Mom to Beebe, the best dog in the world.

(Thank you so much to Sara for sharing Beebe’s story on the blog. She’s truly a special dog, and it’s been an incredible joy to watch her blossom into the social and happy dog she is today.)