Dominance has become a dirty word in the dog training world – so much so that it’s often referred to as “the D word” by professional trainers when speaking to one another, as if even the mention of it will cause others to gasp in horror and back slowly away. Many normal canine behaviors are thought by the public and by mis- or uninformed canine professionals to be caused by dominance. Certain television celebrities have attributed everything from appeasement gestures such as licking to obsessive light chasing to normal dog behaviors such as excitement on leash or at doorways to dominance. But what does this phrase really mean, and how can we best apply the concept to our interactions with dogs? 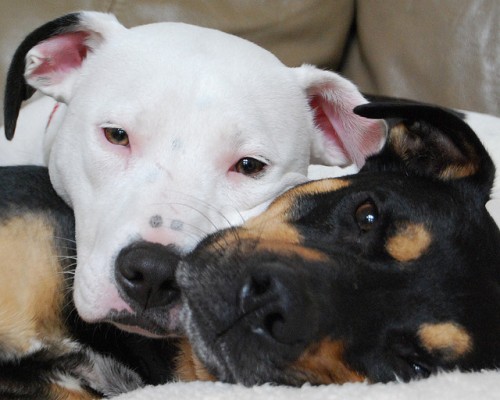 Scientifically, “dominance” refers to the outcome of a behavioral interaction between two individuals. The dominant individual is the one who gains priority access to the resource (food, location, female in estrus, etc.) that he or she wants. It is not a personality trait.

This is an important point. Referring to a dog as “dominant” is like saying someone has an “in love” personality. A dog may be dominant over another dog in a specific interaction (such as when they both want the same bone), but may be submissive in the same interaction with a different individual (perhaps with you or with an older dog). You may be in love with a specific person, but hate another. The important point in either case is the context and the individuals involved. While some individuals may be more likely to fall in love easily or to gain access to reinforcers more frequently, each situation needs to be viewed as a distinct event. Social relationships are too complex to make such broad generalizations.

This makes more sense if we think of a human example. Take your family, for instance. When you were younger, your mother or father was probably dominant in most interactions. They (hopefully!) had higher status than you, and could therefore decide how resources (food, attention, sleeping spaces, etc.) were distributed amongst you and the other family members living in the household. But while your father may have had fairly high status in your family group, he may not have held the same status in other interactions, such as at work or in his poker group. In those situations, he may have been submissive in the majority of interactions, with his boss or the host of the poker club getting to decide how resources were allocated. Just because your father was generally dominant in his interactions with you didn’t mean that he had a dominant personality any more than it meant you had a submissive personality as a 5-year-old.

In a group of dogs the hierarchy is likely to shift, just as it does with people. You may generally defer to your boss, but if she comes to dinner at your home she’s likely to defer to you in many social interactions, such as where she sits as the dinner table and what she eats. Dogs are the same way. A dog may generally be the dominant animal when he or she wants something, but that doesn’t mean that this will be true in every single situation.

Dominance as it’s described by most laypeople refers to a set hierarchy, and the more quickly we can drop this notion the better our interactions with our dogs will become. While status is definitely important to dogs, the myth that dogs form rigid social hierarchies is blatantly false. Just like people, dogs tend to have more fluid hierarchies that shift depending on context.

Equally important to understand is how status is achieved. The point of a dominance hierarchy in any species is to avoid conflict. Imagine if you and your boss had to slug it out each time you sat down at a meeting together in order to determine who got to sit behind the big desk. Physical aggression takes a lot of energy and can be dangerous. Whether it’s two dogs biting each other over ownership of a bone or two geese pecking each other over a prime nesting site, actual physical confrontations have a very real risk of injury or death… and no one wants that.

“Dominance” as an excuse to use aggressive behaviors towards our companion dogs, then, is a very inappropriate undertaking, not mention a blatant misunderstanding of the science. When dogs have a conflict, they follow a very ritualized series of signals designed to minimize or avoid physical altercations. These may include staring, stillness, whale eyes, lip lifts, tail wags, and more before the dog even begins to growl, much less to come in physical contact with his or her opponent.

Using dominance as an excuse to touch your dog in any way, including jabs with the hand, kicks, jerking on a collar, forcing your dog onto his or her back, or remotely making contact through an electronic collar is absolutely inappropriate. Status in a stable group (whether human, dog, or elephant) is not about who can be the most aggressive or cause the most damage, but rather about who has the most confidence and experience and can therefore be best trusted.

If you have concerns about your dog’s status, the take-home message here is simple: physical aggression is not the answer. Over the next month, we’ll discuss some of the most common misconceptions about dominance hierarchies, including alpha rollovers and how you can be a great leader to your dog. In the meantime, I’m curious to hear what you think. Have you been using dominance theory incorrectly with your dog? How do you make sure that your dog looks to you as a leader? Please share your thoughts in the comments section below!