How to Break up a Dog Fight

I witnessed my first dog fight in an agility class. I was 17 years old, and was taking my parent’s obnoxious adolescent Labrador to classes, which I earned through apprentice work with the trainer. One of the other dogs in class disliked my dog’s bouncy, oblivious body language, so she pulled the leash out of her owner’s hands and jumped him as he exited the tunnel. He fought back loudly, and I stood in shock for what seemed like forever (but was really only a few seconds) before the trainer pulled the attacking dog away from my dog by her back legs. There were no injuries other than a tiny scratch on my dog’s flank, but I was horrified.

Since that incident, I’ve broken up my share of dog fights. Between shelter playgroups, loose dogs on neighborhood walks, and a revolving door of foster dogs, I’ve unfortunately had plenty of experience breaking up fights safely and effectively (and even more experience in preventing fights in the first place). 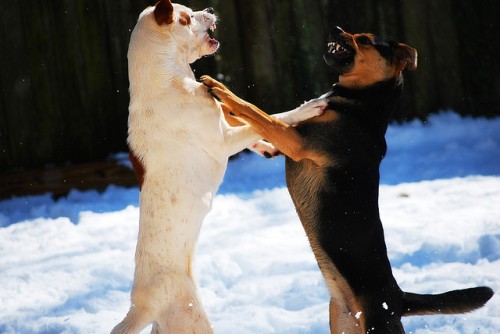 Educating yourself about how to safely and effectively end a dog fight is incredibly important. Trying to break up a dog fight without the knowledge of how to do so safely can get you bitten, or could even cause the dogs to redirect and attack you. While most fights will end fairly quickly on their own, more serious fights that are not stopped could end in serious injury or even death to the participants. While rare, I’ve seen a handful of cases in which two unsupervised dogs fought badly with no one around to break them up, resulting in gruesome injuries or the death of one or both dogs.

It’s important to understand that any dog can fight. Dogs don’t have lawyers or letters to the editor, so they solve their problems with ritualized body language that can escalate to using their teeth. Some breeds (such as terriers, who were specifically selected for aggression towards other animals) may be more prone to fighting, but all dogs will fight if they are pushed far enough by another dog. Much like people, each dog’s individual temperament will contribute to their likelihood of getting in fights with others. Some of us are quite patient, with long fuses, while others are more hot-blooded and likely to spark up at the slightest insult. Know your dog, and keep him or her out of situations that could provoke a fight.

In addition to knowing what to do to prevent a fight, it’s helpful to know how your dog is likely to fight. Some dogs will fight by biting and releasing multiple times, while other dogs tend to bite and hang on. If you have a dog who will bite and hold, you’ll want to invest in something called a bite stick, which can be used to open a dog’s mouth enough that he can be pulled off his victim with minimal injury. Learn how to use the bite stick and keep it with you when your dog will be around others.

If you witness a dog fight, the first step is to take a moment to take stock of safety factors. If there are children or other vulnerable people nearby, remove them first. Other dogs who may join in the fight or who could be redirected on should also be removed. You will then need to decide whether you want to try to break up the fight, understanding that attempting to break up a fight could cause one or both of the dogs to bite or attack you. While scary, noisy fights tend to be less intense than silent fights. If one or both dogs is fighting silently, they are likely intent on doing serious damage or are fighting for their lives.

If you decide to break up the fight, it’s helpful to start with interventions that don’t require you to approach or touch the fighting dogs. Try making a loud noise by yelling, smacking the wall, or hitting a metal pan with a spoon – anything noisy will do. We have an air horn in our fight kit at my training center, which is loud and startling enough that it breaks up most fights at least long enough for the dogs to be separated.

If making a loud noise doesn’t work, startling the dogs using water or spray can sometimes stop a fight. Spray Shield is a citronella spray that can safely be used on dogs. If you don’t have any on hand, you can try upending a water bowl over the dogs or using a hose (or the hose attachment from your sink if you’re indoors).

For dogs who need to be physically separated, there are several options. If possible, try inserting something in between the dogs, such as a chair, board, or even a couch cushion. The goal is to physically separate them without putting yourself at risk. If the dogs are near a door, you can push them towards the door using the nearest solid object, then close the door between them.

If you absolutely must physically separate the dogs, keep your hands away from their mouths. Don’t grab for their collars or scruffs. Instead, grab one of the dogs where his back legs meet his torso and lift his back end off the ground, pulling him back away from the other dog. Pull him in a circle, continuing to lift his back end, until he calms down enough to realize what’s going on so that he’s unable to reach you with his mouth.

Once you’ve got the fighting dogs separated, give everyone some time to calm down before checking them over for injuries.

Have you ever had to break up a dog fight? What did you do? Share your stories, tips, tricks, and questions in the comments section below!

This entry was posted in Aggression, Dog-Dog Issues, Trainer Development. Bookmark the permalink.