Dog-Dog Aggression Between Housemates Part One: the Fight

In retrospect, we should have seen the attack coming. On two separate occasions after full days of running around, our normally sweet and friendly dog Trout had snarked at different foster puppies over food. Both times she stopped quickly without making contact when we intervened, and was then confined to a room to rest. However, both times she also showed a concerning lack of the typical warning signs dogs give off before lunging or snapping, only freezing slightly for an instant before she went after the puppies. 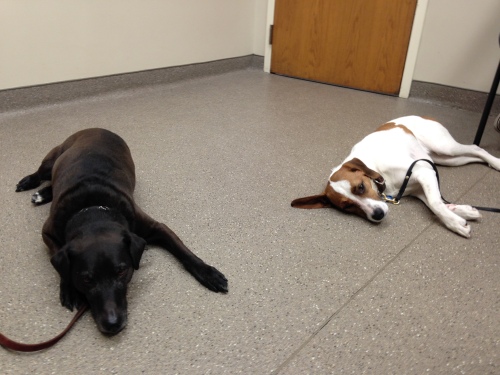 Waiting for treatment at the e-vet

We chalked Trout’s concerning behavior up to soreness and not feeling well. With a mystery illness resembling Addison’s disease, her body struggles to handle stress, including the good stress of exciting events. Her muscles have wasted with the disease progression, and her energy level fluctuates. She has episodes of GI distress where her reflux is so bad that she will attempt to eat anything she can get in her mouth – cloth, cotton batting from dog toys, and even foam from dog beds. She has full-body muscle spasms, twitching and groaning as she lies on the floor. Her cognitive abilities have suffered too, and while on some days she’s the sweet, happy dog we’ve always loved, other days she seems confused by even the most simple routines or cues. We keep her comfortable on a regimen of medications, and she continues to have more good days than bad.

On the day of the attack, Trout was not having a good day. She had run hard for close to an hour at the park the day before, a special treat that we typically wouldn’t let her indulge in. However, it was one of the first nice days of spring, and she’d been doing well for a few weeks. She was extra sore this day, and I could tell that she was having some cognitive issues as we did a short training session. I kept the exercises easy, and at the end of the one-minute session she was able to end on a happy, successful note. I then called our other dog, Layla, into the room where I was working – something I’ve been doing for three years, since I always work one dog and then the other.

Today, that was a problem for Trout. As Layla entered the room, Trout stiffened up and growled, guarding me and the treats. I grabbed for her, missing as she launched across my body and bit my elbow, then attacked Layla. If you’ve never seen your beloved pets fight, the sight is chilling. Layla instantly defended herself, and my boyfriend and I each grabbed a dog. We had to wait for the dogs to let go of one another, as both were holding on in ferocious terrier grips, and pulling them apart would have caused more damage. The fight was over within 20 seconds, although in the heat of the moment it felt like much longer longer.

Unfortunately, that twenty seconds was all it took for both dogs to sustain injuries. We packed them up in the car for a trip to the e-vet as I contemplated the seriousness of Trout’s attack and tried to hold back tears over the sight of Layla’s deep wound.

Over the next two weeks, I’ll be writing about our experiences with Trout and Layla. What did the location of their bites have to say about their intentions during the fight? How did we manage the two dogs to prevent future incidents? How did we re-integrate them into the same household? I’ll cover all of these questions as I discuss living safely with dogs who’ve hurt one another.

In retrospect, we should have seen the attack coming. However, love is blind, and while I likely would have picked up on the warning signs with a client’s dog, knowing and living with my own dogs skewed my perspective. There’s a reason that even professional dog trainers hire other professionals when our dogs have issues, and this story is a good reminder of that. I’m grateful that Matt and I were right there when our dogs went at it. This story could have been very different had we not been – one of the biggest reasons why I never leave the two dogs unattended together.

Have your dogs ever fought with their housemates? How did you handle the situation? Please share your stories in the comments below, and watch for the next installment in Trout and Layla’s story next week as I discuss what the location of the bite wounds told me about the two dogs’ intentions.

38 responses to “Dog-Dog Aggression Between Housemates Part One: the Fight”