Marmaduke “Nose” Reusche – in memory of a good dog

Every trainer has a story about their crossover dog. Duke was mine.

Duke was adopted by my parents when he was 9 months old. He had been found as a stray and was never claimed by his original owners. We started training classes within a couple weeks of bringing him home, and my life changed forever. 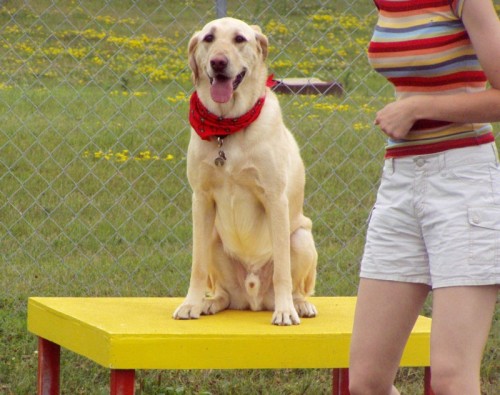 Duke introduced me to clicker training. He loved going to classes, and tried so hard to be a good boy. Learning wasn’t easy for Duke, as he had the canine equivalent of some sort of learning disability. He learned well in the moment, but struggled to retain new information from day to day. In spite of this, he enjoyed a steady stream of obedience and agility classes. The more treats, the better! He learned tricks and eventually even earned his CGC certificate (on our seventh try).

Duke was my first instructor in reactivity and anxiety. To say that Duke lacked social skills with other dogs was an understatement. Other dogs made Duke anxious, and he would charge at unfamiliar dogs on walks. When he met a new dog, Duke would hump whichever end he encountered first, the commissure of his lips pulled back anxiously, ears back and eyes wide. If corrected by the other dog, he would fight back noisily but without doing damage. 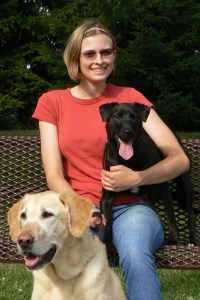 Slow introductions proved that Duke could do quite well with doggy friends, and the controlled environment of class worked well for him. He did well with a string of foster puppies and became good friends with Layla, Dobby, and Trout as I added new dogs to my canine family. At home with my parents, he enjoyed being the “only dog” most of the time, and viewed their cat Trouble with the mingled apprehension and respect that only curmudgeonly old cats can provoke.

Duke’s chief joy in life after food was to be with his people. A true velcro dog, Duke was deeply unhappy when left home alone and loved nothing better than to spend time with those he loved. Anxiety medication and stuffed Kongs helped to manage Duke’s separation anxiety throughout his life, and he eventually came to view his crate (complete with orthopedic dog bed and an ever-present stuffed Kong) as a comforting place. He would even sleep in his crate when his hips were bothering him.

As Duke aged, he settled into a comfortable and happy routine with my parents of evening walks with my mom and sharing popcorn with my dad. He loved getting his butt scratched, even if it sometimes hurt his sore hips. He played with his quacking duck toy, shaking it angrily whenever anyone would leave the house. He barked – oh how he barked! at noises and sometimes at nothing at all. He would get stuck barking, standing in the living room and unable to see out the front window to know what he was barking at, but still fulfilling his self-appointed sentry duties nonetheless.

Duke’s love of food drove him to steal and eat a veritable feast of food and food-like objects in his youth, and despite some close calls (activated charcoal when he ate the bottle of ibuprofen, treatment for pancreatitis when he got into the entire pan of apple crisp, diligent monitoring until he passed the chunks of ceramic spoon-rest), food was ultimately not his downfall. He became all-too-familiar with hydrogen peroxide and would run when he saw the brown bottle come out. Stories of Duke’s dietary indiscretions became the stuff of legends. “Remember that time he ate ten pounds of kibble at once? He looked like he was pregnant!” “Or that time he ate an entire bag of Hershey’s kisses, wrappers and all, and his poop was festive for days…” 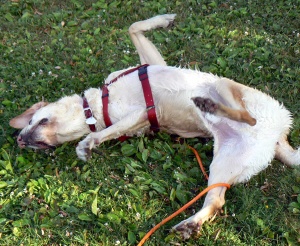 Duke was not an easy dog. He was anxious and reactive and naughty. Duke was the best dog. He was the sweetest, and so kind with children. He was a loyal and faithful family companion who loved nothing more than to be with his people, in the center of a crowd. He didn’t demand attention. He just wanted to be included. He loved to sit on laps, all 70 pounds of him. He loved to lick faces. He loved to show off his tricks for treats – sit, down, settle (tail too!), balance up, and shake. He was not an easy dog, but he was a good, good dog. He was our good dog.