Written by Sarah Griffin. Thank you to Sarah for sharing Bear’s journey!

I have a fearful dog. At this point in his life, I expect surprise when I say that to strangers. I hear it all the time: “Really? But he’s so happy!”

In most situations, my fearful dog no longer appears to be fearful. He still is, but I’ve built a bond of trust with him based on positive associations with scary things. For the behavior geeks among the readers, I’m referring to classical conditioning! For the rest of us, let me sum it up this way:

So how does that work in the long term with a “problem dog,” and why do we at Paws Abilities believe in this method? Let me take you back to the dog before the training.

My German Shepherd, Bear, is a rescue from a city shelter where he was slated for euthanasia. For the whole two hour drive home from the shelter, he cowered in the back of my car on the floor. He did not want me to touch him. He did not make a noise. Upon getting inside my apartment, he lay down in the corner of the bed, hid behind a stuffed animal, and shivered. Even if I hadn’t snapped a picture, that image could never leave my mind. This is that picture. 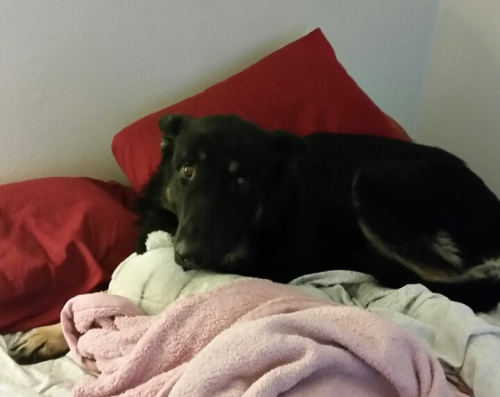 Now, take a look at a picture from about two years later. 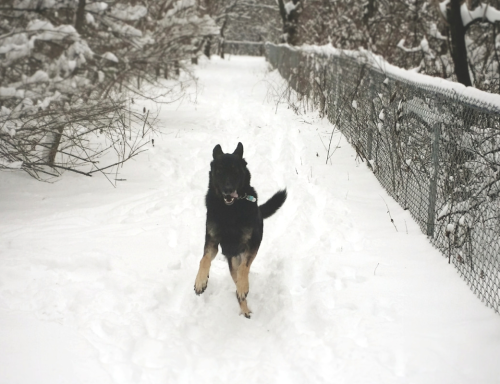 (Caption: Now Bear likes to go out on adventures in the winter more than I do!)

Here, Bear is bounding through the Minnesota snow, tongue lolling out of his mouth, ears only back because of how fast he’s running. He’s being recalled back to me to go out further on a walk, and he loves it. His tail is up, his eyes are on me, and he’s happily responding to my cue from a distance with distractions all around.

Bear is an extreme example, so don’t worry! Not every dog will require anywhere near as much work. Perhaps your dog hates those Wednesday tornado sirens, and that’s her very scary thing. Think about what very good thing would help your dog cope with those sirens. For Bear, the very good things are often food! Bits of cheese, deli turkey, licks of cream cheese, pieces of leftover meat, a potato chip… Think outside the box. A very good thing has to be special, after all, for it to qualify in the first place. However, this list is only made up of things my dog likes– your dog may prefer a game of tug to a handful of cheese. 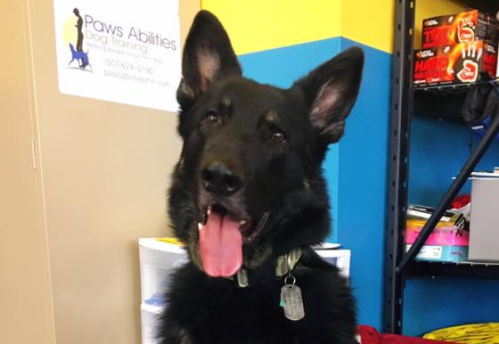 Helping a fearful dog requires consistency, patience, and a lot of rewards, but I can’t give you a better testimonial than Bear’s. With lots of work and lots of love, my shy boy not only has a life, but he has a good one.

Need help expanding your fearful dog’s world? We are experts at confidence building, and can help you put together a customized program to bring your wallflower out of his or her shell! We have all sorts of options to help fearful dogs, ranging from private lessons to group classes.

Already worked through fear issues with your furry friend? Tell us all about your journey in the comments section below!

Sniff Before You Drip: Essential Oils and Your Dog

Have you ever been stuck in an elevator when someone wearing way too much perfume walks on (or worse yet, stuck sitting next to that person on a plane or bus)? Not only does it bother you initially, but it can actually be physically uncomfortable. You quickly develop a headache, and may feel nauseated. Often you will go “nose blind” after twenty minutes of smelling the perfume or cologne, no longer registering its presence at all (but also not able to smell anything else in your immediate environment). Even after you’ve long since stopped being aware of the scent, the physical effects on your body linger on.

We all know how unpleasant strong odors can be. However, I think we frequently forget to look at (or rather, sniff) the world from our dog’s perspective. 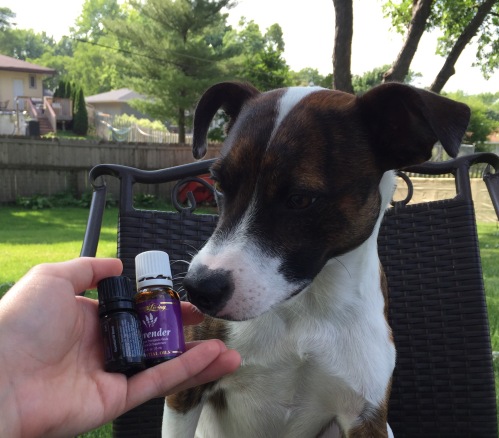 Consider this: the canine olfactory system is so specialized, so amazingly designed, that we literally cannot match it. Even the most brilliant scientists in the world are unable to build a robot that can track or differentiate odors as well as your pet dog. Dogs are unmatchable.

Let’s look at the dog’s olfactory system in relation to our own favorite sense, vision. Dogs so far outperform our own limited noses that we must seem to them to be, for all intents and purposes, anosmic. If scent were vision, what you could easily see 1/3 of a mile away, your dog would be able to see three thousand miles away, just as clearly.  Dogs have somewhere between 200,000,000-300,000,000 scent receptors in their noses. They’re rock star sniffers.

Why does this matter? I want you to think about your perfume-drenched elevator companion for a moment. What if you had to live with that person 24/7? What if you could never escape that tiny elevator? This is the reality for many dogs. They’re stuck in physically overpowering and even painful scent environments for their entire lives.

That diffuser plugged into the outlet in your living room might smell heavenly to you. But, do you think it would still smell as good if it were 10,000 or even 100,000 times more pungent? Does your dog enjoy it?

Worse yet, do you use essential oils on your pet or in your home?

Essential oils may have some health or mood-altering benefits. I have no problem with dog owners using these as an ancillary treatment alongside training or behavior modification. In fact, conditioning a relaxing and “safe” scent can sometimes make a huge difference for anxious dogs! However, I often see oils used way too irresponsibly with animals. Good practitioners will tell you which oils are safe or unsafe to use with your pet. However, your responsibility doesn’t end there. You also need to make sure that you’re using the oil in the correct concentration.

Considering how keen our dogs’ noses are, we need to be highly cautious about using oils at full strength. I instead prefer to use a small bit of the essential oil diluted in a less pungent carrier oil. A single drop of essential oil can be mixed into a small glass jar of olive or coconut oil, for example. You can then further dilute the oil by repeating the process, placing a single drop of the diluted mixture into a second jar of carrier oil. While this may not smell as strongly to you, it will still be plenty powerful for your dog’s superior sniffer.

If you wish to use essential oils with your dog, I also recommend that you ask your dog which oils are best. You can do this by simply placing a single drop of your diluted mixture on a small washcloth or towel. Place the scented cloth near where your dog likes to hang out, and observe your dog’s reaction for twenty-four hours. Does your dog investigate, lie on, or seem drawn to the scented cloth? Great! That’s a green light to use the diluted oil for your dog. Does your dog ignore the cloth? Go slowly, and be cautious about its use. Does your dog avoid the cloth, or perhaps even the whole room that the cloth is in? Stop right there. Your dog finds the oil aversive, and you should not use it.

Whether you plan to use an oil diffuser or rub the essential oil directly on your pet, I encourage you to always ask your dog whether they find the scent acceptable before you proceed. The same goes for other scents in your home. Scented laundry soap, fabric softener, room sprays, candles, perfumes, cologne, and diffusers can be highly aversive to many dogs. In fact, I believe that excessive use of these products often contributes to many of the common behavioral issues we see in our pets by adding an unnecessary stressor to their lives, and perhaps even making them feel less well.

Please, be sensitive to your dog’s sniffer next time you wish to use scent in your household. You may be surprised how very many opinions they have about the topic!