What the Dog Heard

“He’s so stubborn. He knows how to sit; he just won’t do it unless I show him a treat.” My client glares at his bulldog puppy. The puppy gazes back at him softly, waiting for him to produce a treat. The second the owner pulls out a cookie, the puppy plops into a sit, grinning and wiggling.

Keeping my amusement to myself (what a clever pup!), I demonstrate to his owner how to reverse expectations. Showing the puppy a piece of chicken, I ask him to sit.He immediately plops down and I praise him exuberantly, but withhold the treat. Very ostentatiously, I set the chicken chunk on a nearby counter, then ask the puppy once again to sit. He stares at me, at the chicken, back at me. He remains standing. “Told you so!” the owner crows. “Bulldogs just aren’t very smart.” Ten long seconds later, the puppy’s rear end starts to lower. Before he’s fully in a sit, I click his downward movement and hand him the chicken, telling him what an intelligent pup he is. After a couple of minutes the puppy is slamming his rear enthusiastically on the ground on either a hand signal or verbal cue with no food lure. Stubborn? No, just confused about the rules.

I can understand my client’s need to label his puppy as stubborn and stupid. Last winter, I adopted a broken dog. I had been looking for a dog for a while. However, I hadn’t been looking for this particular dog.

Dobby started off as one of a long line of foster dogs. A neophobic mixed breed from the local pound, he was adorable but was most certainly not the future competition prospect I had in mind. He was hand shy, terrified of doorways, and so overwhelmed with his change in circumstances that he skipped every other meal. Trying to use a food lure or hand target resulted in him hitting the ground and trying to become one with the floor. Guests to my home caused him to growl and back up quickly, eyes wide and tail glued to his belly button.

My other dog, Layla, had different ideas about him. She fell in love, sleeping curled up around this dog and spontaneously inviting him to play on a daily basis. Since she’s typically highly dog-selective and only tolerates fosters, this was so out of character that I sat up and took notice. After two months of her embarrassing love affair, I gave in. The adoption paperwork was signed, and I found myself the proud owner of a dog who flattened to the floor and peed all over himself if I so much as looked at him cross-eyed.

I joked with my friends that I was just attracted to “broken” dogs. My other dogs have also been less-than-perfect when they came to live with me. I tried not to feel resentful that my plans for a competitive sports dog were being pushed back several years. It was worth it to see Layla so blissfully happy.

That’s when it hit me. I may not be calling my new dog stubborn or stupid, but labeling him as a “broken” dog was just as damning.

Words have power. It’s easy to forget this. In fact, our culture refutes this truth on a daily basis. “Sticks and stones can break my bones, but words can never hurt me” is a lie that we tell ourselves from the time we’re little. It feels good to think that we’re immune to the power of suggestion. We’re stronger than that. We know how to look at facts and think rationally. How well we fool ourselves.

The real truth is that labels are incredibly powerful. One need look no further than the “Pit Bull problem” to see how this plays out. Two similar bite incidents happen on the same day. Both involve damage to a young child’s face by the resident dog. One involves a Labrador Retriever, one an American Pit Bull Terrier. The incident with the Lab is reported in two local papers. The incident with the Pit Bull is picked up by the Associated Press and winds up sparking debate on multiple national news shows about the need for Breed Specific Legislation. Label the biting dog with a different breed, and the headlines become so much less sexy. Pit Bulls are not Labradors, and Labs are not Pits. However, the “Pit Bull” label has come to mean something entirely different to the general public and the media than it does to those of us who work with these dogs on a regular basis. Dogs are profiled based on the size of their head and the mass of their muscles rather than being approached as individuals.

By calling my dog broken, even jokingly, I was damaging our prospects before we even started. Any time we label something, we create mental associations. When I think of the word broken, I think of having to repair something, of possibly not being able to fix it. Word associations pop up in my mind: discarded, unusable, neglected, thrown out, useless. These mental images were being attached, however unconsciously, to my new dog.

Realizing this, I decided to try an experiment. I had already begun a desensitization and counter-conditioning program with Dobby, taking him to quiet places and rewarding him lavishly for brave behavior. I was working within his comfort zone and patiently encouraging him to explore the world. I changed absolutely nothing about this training plan. The only detail I altered was how I described him. Instead of speaking about Dobby as broken, rescued, neophobic, or terrified, I invented new labels. Clicking and feeding him a food reward for walking through a doorway without crouching, I cooed to him about what a “big, brave boy” he was. When he finally started to offer sits, I praised him as “SUCH a clever boy!” Over and over, the little dog heard, “Dobby’s clever.” “Dobby’s brave.” “Dobby’s a good dog.”

I expected results. I’d been seeing progress already, and I figured this small change could only improve things. After four months, if my little dog was still so terrified that it impacted his quality of life, I would talk to my veterinarian about a referral to a board certified veterinary behaviorist to get him further help. 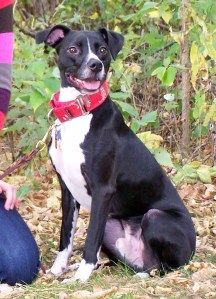 This proved unnecessary. Suddenly, my “neophobic pound puppy” was playing tug like a Schutzhund dog and jumping up on strangers in friendly greeting. He would go into the backyard with a ball in his mouth to run and run, tail up and eyes sparkling. He bounced around me as I worked in the garden, and pranced past the bikes, joggers, and baseball players in the park as if they were only so much scenery. He passed the “appearance and grooming” test in the Canine Good Citizen exam, sitting calmly by my side as a complete stranger handled his ears and paws, then ran a brush down his back.

Each day he became braver, and suddenly I had my competition prospect. Here was a dog with a great work ethic, drive to spare, and the intense desire to work cooperatively with me. Here was a dog who, while still unsure about new things, was willing to trust that I would keep him safe and to try his very best each time I asked it. The only difference? A few small words. The power of suggestion.

It’s true that dogs couldn’t care less about words. Words are as foreign a concept to your dog as scent is to you. However, dogs live in a human world. In our world, words have incredible power. Mental imagery allows us to practice dealing successfully (or not!) with a given situation repeatedly before that situation ever arises. Labels create subconscious associations that influence our behavior, which in turn shapes our dogs’ behavior.

Simple changes can produce big results. My new dog is brave, clever, and willing. He’s even earned his very first APDT Rally Obedience title and was able to walk through the busy trial site, with crowds of unfamiliar people and dogs, with his ears and tail up. My client’s Bulldog puppy is stubborn no more. On graduation night of Beginning Obedience class, he proudly showed off his dog’s new trick repertoire: shake, wave, high five, and yes, sit on cue with no cookie in sight. As his classmates applauded, a fellow student expressed doubt that her dog would ever become so well behaved. My client’s answer? “My dog made it easy: he’s really smart.”

Dogs are incredibly gifted at reading intent in our tone, posture, and movement. Just because they don’t know the literal meaning of each word doesn’t mean they aren’t influenced by language. Stop for a minute and consider this: what have you been saying to yourself… and what has your dog heard?

14 responses to “What the Dog Heard”