“My Dog LOVES Other Dogs”

“My dog just LOVES other dogs!”

If only I had a dollar for every time I’ve heard this phrase! Often uttered as a lunging, whining, adolescent dog drags her owner towards my dog, or worse yet as an off-leash dog makes a bee-line towards us, it usually spells trouble. Here’s the thing: my dogs do not want to meet rude, over-the-top dogs, and there’s nothing wrong with that. Furthermore, I consider my dogs to be more well-socialized than these canine Tarzans, even though they’re quite likely to snark at the “friendly” dog who jumps on their heads. 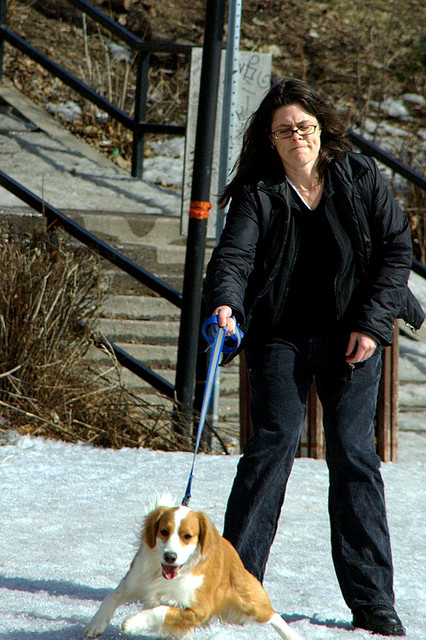 Our society seems to have lost sight of what appropriate dog-dog interactions look like. The idea that every dog should want to play with every other dog they meet is ludicrous. Dogs who don’t fit into this narrow view of dog sociability are viewed as disturbed, aggressive, or in need of “rehabilitation.” A mature dog who snarls and barks at an adolescent puppy who plows into her is corrected by her owner and told to “play nice,” when really all she wants is to be left alone.

No other species is held to these standards, not even our own. Imagine if you were walking down the street and a strange man started running towards you. As he raced towards you he started shouting, “Hey! Hey! Hey! Hey you! Hey!” at the top of his lungs. Now imagine that when he reached you, he grabbed you up in a huge bear hug and spun you around, lifting your feet off the ground, while shouting “Hi! Hey, hi! Hello!” as loudly as he could. How would you react? Would you feel justified in responding defensively? Would you feel better about the interaction if his wife ran up behind him and told you, “He just LOVES new people!”?

This creepy interaction is no different from what many dogs are forced to tolerate every day. Look at it from your dog’s perspective. She’s walking along, enjoying the sights and smells of her neighborhood, when another dog appears in the distance. The dog is straining at the end of his leash, and as soon as he sees your dog he starts yipping and whining.The second he gets close enough, he starts jumping all over your dog while still whining. His owner proudly tells you how much he LOVES other dogs, and when your dog snarls at him, the other dog’s owner pulls him away with a hurt, “He just wanted to say hi.”

Over-excitement like this is not a hallmark of a well-socialized dog. We understand that we must teach human children to behave calmly and politely around others, but sometimes forget that the same basic principles apply to raising our dogs. Social behavior includes the ability to just hang out calmly with members of one’s own species.

We’ll talk later this week about what to do if you have a “canine Tarzan” who doesn’t understand how to greet other dogs politely. In the meantime, let’s drop the idea that every dog should love every other dog they meet, and stop holding them to such impossible standards. I expect my dogs to tolerate other dogs who aren’t getting in their faces, just as I tolerate the close proximity of strangers in an elevator. But if they don’t want to make friends with every dog they meet, that’s okay. In fact, it’s downright normal.