Diary of a Fearful Puppy: Weeks Two and Three

Last week, we covered formerly feral puppy Chowder’s first week in our home. By the end of the first week, Chowder was snuggling with us in the evening and enjoying regular play sessions with our dog Trout. He would still run away when approached and flinch if we reached towards him. His crate was his safe haven, and he ran to it whenever he needed a bit of space – a behavior that made it easy to move him from one location to another without having to handle him, as we could carry the crate with Chowder inside wherever we needed him to go. Chowder would still freeze if handled or held, but he was beginning to cautiously investigate his world. 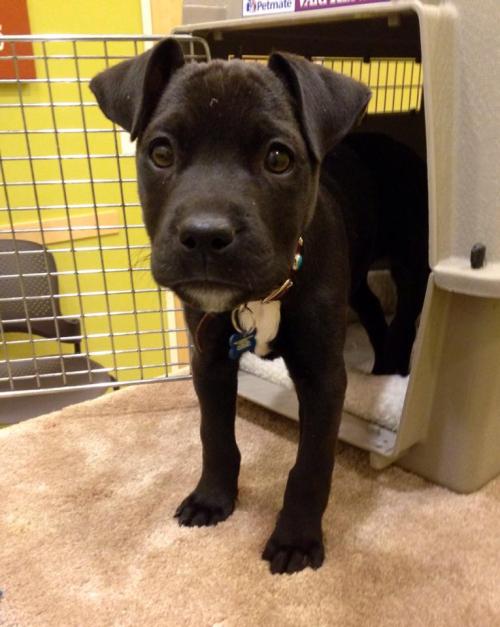 When Chowder first arrived at our home, we’d noticed some odd hairless spots on his legs and feet, and over the next few days these lesions began to crack and bleed. Soon new spots appeared, and a trip to the vet was in order. When I arrived at the vet clinic, the tech attempted to take Chowder into the back room. I firmly but politely refused, and instead stayed present for the entire skin scraping procedure, feeding Chowder bits of hot dog and cheese. He wasn’t able to eat while being restrained as he was too scared, but quickly returned to munching on bits of treat after the procedure was finished. We played some sniffing games where I scattered treats on his bedding for him to find, and these increased his comfort level and confidence noticeably.

This vet visit brought up an important point about fearful dogs. You are your dog’s advocate. It’s always okay to stand up for what’s best for your individual dog. I knew that had the vet tech taken Chowder to the back room, she would have reached into his crate to pull him out (gently, because she was a kind person who loved animals, but still in a way that would frighten Chowder). While he would comply with this, it would break the compact we’d formed with him where his crate was his safe, private place and no one would ever remove him from it. Since Chowder wasn’t likely to come out of his crate on his own and we needed to handle him, we instead took his plastic crate apart and removed the top half of the crate. While still stressful, this allowed Chowder to remain safely planted on his dog bed with four walls around him, and minimized the amount of handling he had to endure.

Chowder’s skin scraping was negative, so he returned to the vet clinic a few days later for a second visit so that he could be seen by a veterinarian. This time he remembered the sniffing games he had played before and cautiously came out of his crate on his own to search for treats which I scattered all over the floor. We repeated the skin scraping, which was again negative, and also ruled out most strains of ringworm by looking at his skin under a woods lamp. Since he wasn’t itchy but his lesions were getting worse, the vet decided to start him on an antibiotic to see whether the spots might be caused by a bacterial infection. Luckily, this turned out to be the case, and the swollen spots on Chowder’s legs and feet stopped bleeding and became less inflamed. By the time the course of antibiotics was over, Chowder was growing new fur over the spots and looked much better!

During the next couple weeks, Chowder continued to accompany me to training classes three times a week, where helpful students tossed him treats. My nose work students were especially kind, and a different student stayed after their own dog’s class each week to take Chowder through the last of the three nose work classes I taught on Friday evenings. Nose work is one of the best confidence builders for shy and fearful dogs. On the first week of his class, Chowder was reluctant to move more than a couple steps away from his safe spot near his crate and was too worried to put his head into a cardboard box in order to eat treats. We placed the boxes near his safe spot and put food on the outside of them, and Chowder sniffed his way over to eat the chunks of chicken and hot dog. By the second week, he was able to eat treats out of shallow boxes, and we started to see him perk up as soon as the boxes were in sight.

I noticed that, while Chowder was making strides in bravery, he continued to have a very difficult time recovering after something startled him. This was a problem, because at this point in his limited experience with people, everything startled him. If someone reached towards him too quickly or a noise spooked him, Chowder often hid and remained jumpy for hours. He would stop taking treats and shut down.

I consulted with a veterinarian friend of mine, and she agreed that the potential risks of using anxiety medication for Chowder were much lower than the risks to his developing brain and body from such constant stress. She recommended that we try a very small dosage of a common anxiety medication, alprazolam, which I already had on hand for one of my own dogs and which has been safely used in human children.

The results were beyond our wildest dreams. While the drug didn’t make Chowder brave, it did help him recover quickly (within 2-5 minutes, instead of hours) from startling events. After making sure he reacted well to it at home in a quiet environment, we used two doses of the drug: once while he was in an ex-pen during a training class and once when I brought him to a friend’s home for game night. After just these two doses, I noticed that Chowder’s ability to recover from stressors even without the medication was greatly improved. Because he’d had success in these situations, he had learned that he could handle them. We discontinued the medication, and he has continued to make lovely progress without it. While my veterinarian friend was quick to point out that these results aren’t typical, she also theorized that perhaps because the medication was used so early in Chowder’s behavioral modification and before he’d had many scary experiences, it was much more successful than it may have been had we waited months or even years to try it, as many people do. Just as doctors often recommend taking pain meds at the first sign of discomfort after surgery in order to keep on top of the pain, getting on top of Chowder’s anxiety and offering him help right away made a big difference in preventing his fear and anxiety from spiraling.

Along with all of these successes out in the world, Chowder also had a very exciting thing happen at home: he finally got to meet Layla. Because Layla is dog aggressive, we waited for two weeks before the two dogs met without a baby gate between them. The meeting went well, and the two dogs were able to hang out in close proximity without fireworks. We didn’t yet allow them to interact beyond casual sniffs as they passed by each other and made sure that there weren’t any valuable resources (such as knuckle bones) that Layla might guard. Chowder’s body language with Layla was beautiful – respectful and friendly without being fearful. On the few occasions when Layla felt uncomfortable and snarked at him, Chowder responded appropriately by backing off but was not frightened. His dog skills really were suburb for a tiny puppy!

At the end of his third week with us, Chowder had developed the ability to calm down and recover quickly if something scared him. He continued to learn new things (“high five” was his favorite trick!) and explore his environment. He had also made several dog friends and eaten treats from over fifty people. He was learning that we would respect his choices and that he could investigate his world when he was ready to do so. Even more importantly, Chowder was learning that he had the power to influence the behavior of those around him. If he moved away, people would back off and give him space. If he sat, people would hand him treats. His confidence was growing every bit as fast as his body (which doubled in size in the space of three weeks, from seven to fifteen pounds).

Have you ever brought home a fearful puppy? What did you do to socialize your new charge and build his or her confidence? What would you do differently if you could do it all over again? Please comment with your tips, tricks, and stories!

3 responses to “Diary of a Fearful Puppy: Weeks Two and Three”